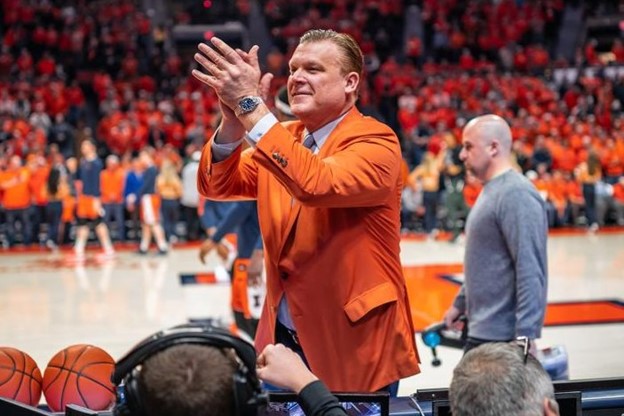 The 2023 recruiting cycle is now in full swing and it is never too early to look at the best case scenario for the class.  But, first let talk about the 2022 recruiting class.

The biggest fish still out on the recruiting trail is Ty Rodgers.  He is a four-star recruit and ranked as a top-50 player in the class of 2022.  Rodgers is a tremendous defender and would be a perfect complement to the two guards they have added in 2022.  Rodgers can play the three or play a small-ball four and should have the athleticism and physicality to play early.  Illinois is perceived to be the leader and he just transferred to Thornton (Ill.)

This article attempts to build a way-too-early dream recruiting class for the Illini with the objective being to keep it realistic with prospects that Illinois has somewhat of a shot at landing.

The 2023 class is loaded with high-level talent from the state of Illinois.  There are two five-star prospects in that class: JJ Taylor and Kylan Boswell.  Taylor is a member of the Fire.  The Chicago native is a top-5 prospect, too.  The Mac Irvin Fire have compared Taylor as “Chicago KD.”  Taylor recently took his first on-campus recruiting visit two weekends ago, as he went down to Champaign to watch open practice and tour the Illinois campus. Illinois was the first program to offer Taylor back in November 2019.  His recruitment blew up this summer, as he picked up offers from Arizona, Baylor, Duke, Kansas, Kentucky, Michigan, Michigan State, North Carolina, and Texas.

Boswell, who is a Champaign native, is considered a top-15 player in his class.  He is now considered a top-3 point guard in 2023.  Boswell exploded on the national scene this summer.  Playing at Corona Centennial out in California, he won a CIF Open Division championship against powerhouse Sierra Canyon in June.  He followed that up with a Peach Jam 16U title in July with Team WhyNot and a gold medal with the USA Basketball U16 national team in August.  Boswell is now at Arizona Compass Prep for his junior season.  He was back in Champaign this past weekend to visit Illinois.

In addition to these three Illinois natives and top targets, four-star point guard Jeremy Fears Jr.  He is considered to be a top-25 player in 2023.  The Joliet, Ill. native recently cut his list to eight schools – Memphis, Michigan, Michigan State, Illinois, Kansas, UConn, Indiana, and Missouri.  Both Boswell and Fears have a history of playing together and there’s significant interest in doing so at the collegiate level as well.  Landing Boswell and Fears could be the next Dee Brown and Deron Williams combo for the Illini.

Even though last season came to an abrupt and disappointing end, being a No. 1 seed and losing in the Round of 32 of the NCAA Tournament was eye-opening to these young players.  Illinois coach Brad Underwood finds himself in a position where his program sells itself coming off an NCAA tournament appearance, a Big Ten tournament championship, and the best turnaround in school history.  The Illini are looking ahead to future success for years to come.  We are reasonable Illini fans, that being said, the 2023 basketball class should be Fears, Boswell, and Taylor.  Landing all three prospects should be the top recruiting class in the nation as well as the BIG.  For reference the lowest rated target here is equal to Ayo Dosunmu’s rating.