One on One with TJ Griffin

Palos Hills (Ill.) Stagg safety TJ Griffin did not need much time to put an end to his college football recruitment. On Tuesday, November 9th, Griffin received his first Division-I scholarship from Illinois. Wednesday, November 10th, the 6-foot-2, 190-pound Class of 2022 safety committed to the Illini.

Bielema in his first recruiting cycle, the 2022 class, has prioritized in-state talent. Griffin is the Illini’s 17th commitment in the Class of 2022 and the ninth in-state senior prospect to Illinois.

Griffin was named 2021 SWSC First Team All-Conference and IHSFCA 8A All-State Team this season. He had 41 receptions for 829 yards and six touchdowns. On defense, he had 25 tackles and one interception. Griffin will be taking an official visit to Illinois the weekend of December 10th through December 12th.That Saturday, December 11th, Illinois basketball hosts Arizona. Also, Griffin’s intention is to sign on December 15th, but I will not be enrolling early.

Griffin spoke with 200Columns about his commitment in this Q&A.

When did the interest begin with Illinois?

Earlier on in the season, my coach had told me that a Big Ten school was looking at me but did not say who and then a couple of weeks passed and the week after our season end my coach tells me that the Illinois wants me to come on an unofficial visit to watch the Rutgers game and ever since then it has been good news.

How did things go on your unofficial visit to Illinois?

I had a wonderful time; the environment was amazing and the coaches I did get a chance to talk to told me that we will be in touch soon. So, I left feeling pretty good.

What were some of the things you did?

I was able to go on the field during pregame to take pictures and soak up the environment. Watched the game with my mom, brother, and sister. Then, after the game, I was able to talk with Pat Ryan and Coach Embleton.

What made Illinois your choice?

Family is everything to me and Illinois is all about family, they showed that they care about me and my future which is why I decided to choose them.

Tell me about your relationship with the staff?

Even in the little time that I have gotten to know them they are all great coaches and have been nothing but welcoming. They have made it known to me that Illinois is a home for me, and I am always welcome. That if I need anything all I have to do is ask.

What is Illinois getting with you as a player?

A leader who is willing do whatever for his brothers wearing the same jersey as him. They are getting someone who has had to grind for everything he has gotten and will continue to grind to become the best player he can be.

How does it feel to be an Illini?

It feels like a dream come true; I get to stay in state, get a great education and play division-one football. I could not be happier to be an Illini. 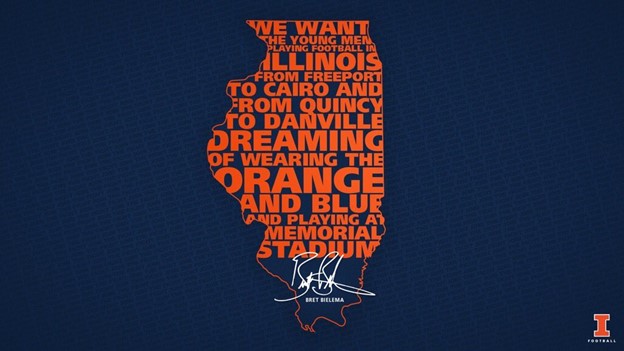 Keepin' it Orange and Blue Ep. 1